How to Mount Snapshot Volumes

Now an ext4 file system has been created on logical volume lv01.

After creating a filesystem on a logical volume, create a snapshot using the lvcreate command and the –snapshot option to specify a snapshot. The same command can also be used to create the logical volume.

The newly created snapshot volume is also listed along with the logical volumes and is marked as Snapshot. Display the detailed information about the snapshot volume by using the lvdisplay command. 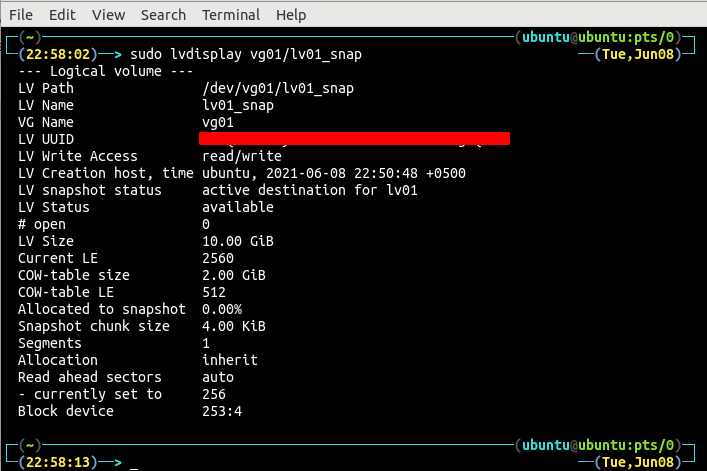 Now mount the snapshot volume on the newly-created directory.

Now the snapshot volume is mounted and can be used to store data. For example, list all the available file systems using the df command, and the mounted snapshot volume will be there.

It will show all the mounted and unmounted volumes there.

The above figure shows that the snapshot volumes mounted using a graphical user interface are mounted at ‘/media/ubuntu/’.

It will display all the mounted and unmounted logical volumes and snapshot volume, which has a file system on top of them.

The mounted volumes can be differentiated from the unmounted ones as they have a small up arrow icon highlighted in the above figure. To unmount the mounted snapshot volume using a graphical user interface, right-click on the mounted volume and select the ‘Unmount’ option from the list.

Before mounting a snapshot volume, it is necessary to create a file system on top of the logical volume. In this tutorial, the complete procedure of mounting and unmounting snapshot volumes has been described by using a command-line interface and graphical user interface.

How to bulk rename files in Linux?

How to Use wc Command in Linux