How to Use LDD Command in Linux

In Linux systems, we constantly work with executable files either in the terminal or graphical applications. Executables contain shared libraries, which are files that are shared and reused across programs. In windows, these are typically in the form of DDL files. In Linux, however, they are in the form of .o or .so files.

This guide will show you how to use the ldd command-line utility to show shared objects and the dependencies in an executable.

Ldd is a powerful command-line tool that allows users to view an executable file’s shared object dependencies. A library refers to one or more pre-compiled resources such as functions, subroutines, classes, or values. Each of these resources is combined to create libraries.

In Linux, library files are commonly located in /lib or /usr/lib directories. Libraries help save time because programs can repurpose and use them as they see fit.

There are two types of libraries:

How to Install The Ldd command

Typically, you will find the ldd command available in almost any Linux distribution. However, in case it is unavailable, you can install it by using the command:

With the command installed, we can start using it.

The syntax is as:

For example, to show the shared library dependencies of the bash binary, we use the command:

The above command shows the dependencies as:

The first section shows a virtual dynamic shared object (VDSO). The second line shows the path of the ELF interpreter that is hardcoded into the executable, and the final part shows the memory at which the library is loaded.

We use ldd options to modify the behavior of the command. Supported options include:

To show the dependencies of a binary with detailed information, we can pass the -v flag to the ldd command as: 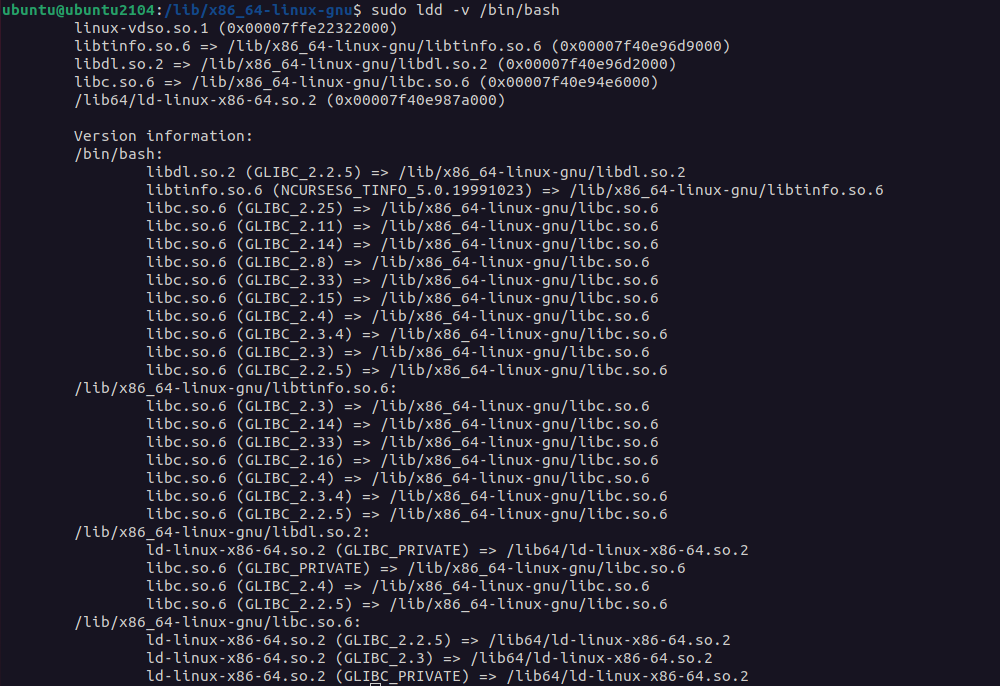 Show unused direct dependencies with the -u flag as:

This tutorial covered how to use the ldd command in Linux and get shared library dependency information for dynamic executables. If you learned something from this tutorial, share it with others.

If you are looking for detailed information, consider the following man pages: