In this tutorial, we delve into the Linux strace command and demonstrate a few example usages.

How to install Linux strace command

Most modern Linux distributions ship with strace utility by default. However, if strace is not installed on your system for whatever reason, follow the steps below to install it.

If you are running Debian / Ubuntu-based systems, execute:

To verify that strace is installed, you can check its version as shown.

In its most basic format, the strace command will trace and display system calls, the arguments (enclosed in square braces or parenthesis), and the executable call.

In the example below, we can see the arguments of running the script hello.sh, call enclosed in parenthesis in the first line.

At the very last line, you can see the exit status of the command, in this case, 0. This implies that the command was executed successfully without any error. An exit code of -1 signifies that an error was encountered during execution.

If you want to get the number of system calls, use the -c option for the count as shown.

From the output above, you can see the number of system calls made, including making the calls. 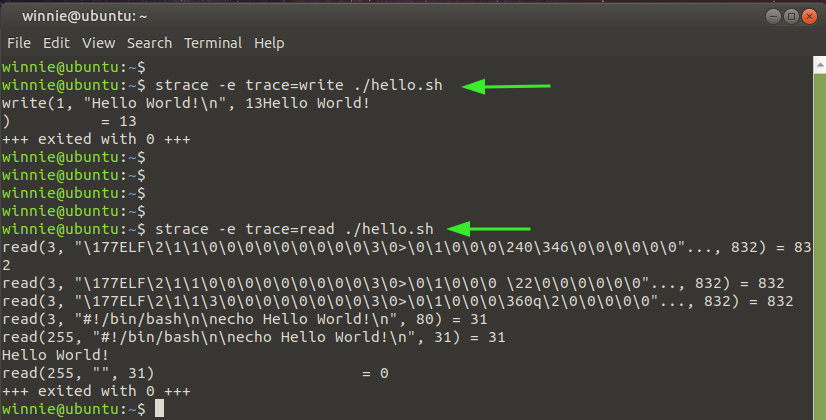 You can restrict strace to displaying network system calls by specifying the type of call. Here. trace=network indicates that we intend to get the network call of the network command ping 8.8.8.8 -c 4.

For system-related calls, use the argument as indicated in the command below. The command prints out the signal-caller for the ping 8.8.8.8 -c 4 command.

Printing the timestamp of each system call

To extract the timestamp for each system call, use the -r option as demonstrated in the following command.

As you can see, a relative timestamp is printed for each system call. The time difference between successive system calls is captured and recorded.

In addition, you can print out the duration of time spent for every system call using the -T option as shown. The time spent is indicated in the very last column as indicated.

Display the exact time of each system call

To print the actual or exact time of the system calls, invoke the -t option as shown. The real-time or wall clock time is printed in the first column.

Display the instruction pointer for each call

To print the instruction pointer for every system call, use the -i option.

Save the output of system calls to a text file

Finally, the strace command gives you the option of saving the output to a text file, as shown.

Here, sample_output.txt is the output file, while ./hello.sh is the command whose system calls we are tracing.

The Strace command is a handy and powerful command-line utility that helps debug applications, commands, and processes, especially if you don’t have the source code available. It’s the go-to tool of choice for software developers and system administrators.

How do I change the owner of a directory in Linux?