How to Use Taskset Command

In Linux-like systems, there are multiple tools to set the affinity of the CPU of a process. One of the popular utilities is the “taskset” command that seems difficult, but breaking it with different steps makes it easier.

With the help of the “taskset” command tool, the user can fetch or set the CPU affinity of a particular process with its given process id (PID). Not only this, but it also helps the user to assign CPU cores manually.

The important thing to keep in mind that CPU affinity is signified as Bitmask but using the “taskset” options, you can display it numerically. You can specify the Bitmask list in a hexadecimal format (with or without 0x).

The syntax of the “taskset” command is:

(Run a command with given affinity mask)

(Set the affinity of CPU of an existing task)

(fetch the affinity of CPU of an existing task)

How to Use “taskset” Command Options:

Through the multiple options of the “taskset” command, the user can perform various operations with the given processes:

Fetch the CPU Affinity of a Process:

The “taskset” command is used to display the affinity of the CPU of a process that is already running.

Before getting started with it, we need to get the PID of that specific process:

Now, use the PID to get CPU affinity in a terminal:

To get the CPU range of a process in a terminal, execute the mentioned command:

You can change the CPU affinity of a process by assigning the new value to the PID of the existing process through the command:

(As you can see, I set the affinity value 7, and it has been changed, you can set according to the requirement)

To check the current value of CPU affinity, use the same command we have executed above. You will get the updated value:

CPU affinity of a running process can also be allocated using the mentioned command:

Using the “taskset” command, the user cannot only set the CPU affinity or range, but the user can also assign the CPU core to the process.

In UNIX systems, cores numbers starting from 0, which means the first core of the system would be 0, and 2nd core would be 1, and so on.

Assigning a core means you want to run that process on that particular core. You can also allocate multiple cores to a single process.

So, the syntax for this process is:

Let’s perform an example, set the CPU core to the firefox using the command mentioned below:

The command will assign core 3 and core 5 to firefox and open it:

There is another way to set core; for instance, if you want to set the core from core 3 to core 5. You will use the hyphen “–” instead of a comma:

The “top” command is used to show all the running processes with their PID that is considered a quick way to get the list on the terminal. You don’t need to find the complex setup to monitor applications.

Type the “top” in the terminal to get the names of all running programs: 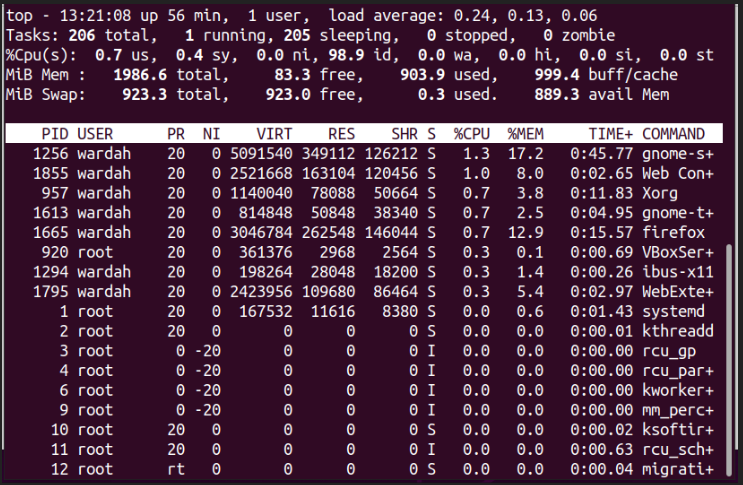 How to Use Linux Logger Command

How to install WSL 2 on Windows 10